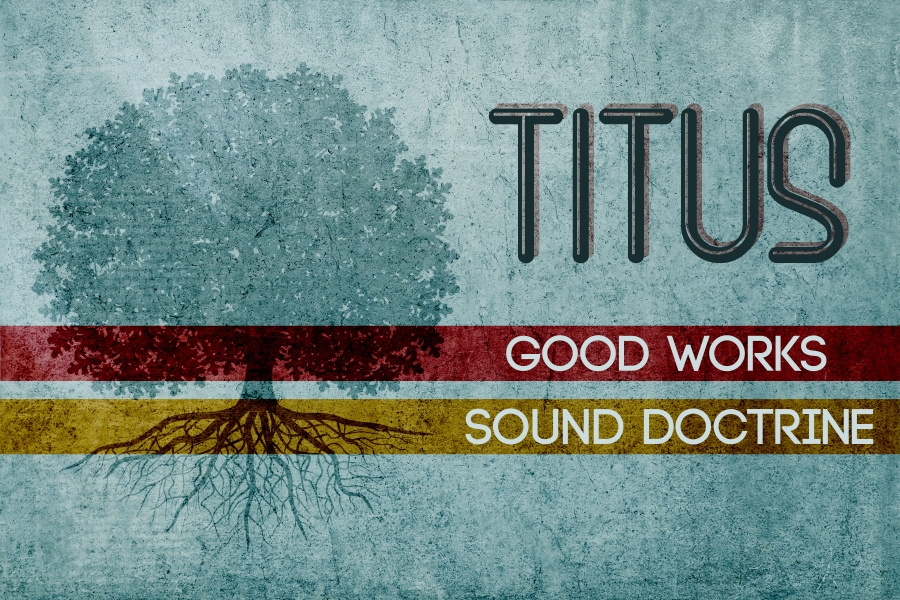 This sermon was originally preached in 2016.

But avoid foolish controversies, genealogies, dissensions, and quarrels about the law, for they are unprofitable and worthless. As for a person who stirs up division, after warning him once and then twice, having nothing more to do with him, know that such a person is warped and sinful; he is self-condemned.

When I send Artemas or Tychicus to you, do your best to come to me in Nicopolis, for I have decided to spend the winter there. Do your best to speed Zenas the lawyer and Apollos on their way; see that they lack nothing. And let our people learn to devote themselves to good works, so as to help cases of urgent need, and not be unfruitful.

All who are with me send greetings to you. Greet those who love us in the faith.

Grace be with you all.

Titus is a letter by the apostle Paul written to his disciple, Titus, to help him organize the churches of the island of Crete. To begin the letter, Paul addressed leadership within the church. He established that each church would ideally have multiple pastors, and he then listed the qualifications for such leadership (as well as what false leaders would look like). Paul then covered the role of church members, encouraging them to share the gospel to all people (a.k.a. discipleship and evangelism). Finally, in the third chapter, the apostle discusses how the church should function as a whole and in general.

After discussing the gospel and our lifestyle as Christians in verses 1-8, Paul now closes the letter with two topics that are less than simple to hear: church discipline and sacrificial giving. In contrast the profitable nature of the gospel, the apostle lists things that worthless and unprofitable for us, like foolish controversies and quarrels about the law. Because we have been saved by the great grace of God, we should be united around the gospel in order to better take its message to the ends of the earth. These controversies and dissensions are unprofitable ultimately because they distract us from the eternally profitable good news.

The letter then closes with Paul giving more personal instructions to Titus. In the midst of his urging of Titus to visit him, he encourages Titus to prepare the churches of Crete for receiving Zenas and Apollos, making sure that they would send them away from Crete in need of nothing. Using this as an example, Paul encourages the churches of Crete to be ready for every good work, so they can help cases of urgent need. This is a great reminder of how the church should display the love of Christ, sacrificial meeting the needs of other brothers and sisters in the faith.

In a contrast to the profit found in proclaiming and declaring the gospel, Paul now turns to warning against the worthlessness of foolish controversies, genealogies, dissensions, and quarrels about the law. Let us briefly examine examples of what these unprofitable items might be.

Second, genealogies likely tied into the circumcision party that we discussed in chapter one. Because the Judaizers argued that Christians must become Jews (through circumcision) before becoming Christians, an emphasis might have easily been built among them that natural born Jews were more valuable than converted Gentiles, which is entirely false, of course. However, this could also have application toward prestigious family names and backgrounds in general. As Christians, we must examine individuals on their own nature, not from their heritage.

Third, dissensions differ from controversies in that there is a more malicious flavor behind it. Where controversies are often foolish and unwise, dissensions are an intentional breaking of the church. The division of churches into factions that splinter into smaller churches is an unfortunate consequence of failing to desire a gospel-centered unity in God’s people.

Fourth, quarrels about the law were also the specialties of the Judaizers. Romans 14 and 1 Corinthians 8-9 provide more detailed looks at Paul’s answer to the quarrels about the law. These quarrels are not in regard to more clear cut laws like the Ten Commandments; rather, Paul is speaking of questions that sound like this: “As a Christians, can I…?” Whether it’s drinking alcohol or watching a particular movie, we all want to know what is expected of us all, yet the answer to many such questions is that God gives people different consciences about certain things. What might be sinfully against my conscience may be perfectly acceptable for someone else, and it is not our place to rebuke them in places where their conscience does not.

That is not to say that these four things will not come up occasionally. We are sinners. If we find ourselves guilty of them, repent. We repent and focus upon what is important. But a church that has lost its focus on the gospel, that has lost its mission to reach the lost and disciple the saved, that church will waste its time on these things. Churches die long before the doors ever close for good because a church that is filled with these four things (which we might call church-killers) is either dead or dying. Its emphasis is upon things that are worthless and meaningless, and the mission gets neglected. The best way to make certain we avoid falling into these errors is to insist upon the gospel. If we set ourselves to doing the work of the gospel, we will not have time to get into foolish controversies with one another. Our minds and hearts will be on what matters.

The apostle in verse 10 turns his attention to the one who stirs up division. The chosen language of stirring gives us an idea of the type of person Paul has in mind. Like a chef making a soup is intentional with their actions and ingredients, so is the cause of divisions. Disunity is their aim and goal. Thus, we must understand that Paul’s application of church discipline must only be applied to those whose sin is damaging the church and unrepentant, and his actions against them are swift and decisive: after two warnings, have nothing more to do with him or her.

Why would God sanction such a harsh practice? Isn’t this kind of discipline unloving? The short answer is no. Many writers such as Mark Dever and R. C. Sproul are quick to point out that discipline is characteristic of a healthy church because it calls the person to repent, warns others about the dangers of sin, and defends the holiness of God. Jesus Himself outlines the plan for how a church should practice discipline in Matthew 18:15-17:

If your brother sins against you, go and tell him his fault, between you and him alone. If he listens to you, you have gained your brother. But if he does not listen, take one or two others along with you, that every charge may be established by the evidence of two or three witnesses. If he refuses to listen to them, tell it to the church. And if he refuses to listen even to the church, let him be to you as a Gentile and a tax collector.

Notice that Jesus is not promoting any degree of physical or abusive discipline; rather, He simply tells us to teach the unrepentant like a nonbeliever, which they are if they refuse to repent. Also, pay attention to Jesus’ order. It is not the role of the pastors or leadership to go between two disputing Christians, at least at first. If we have anything against a brother or sister in Christ, we are commanded by Jesus to bring it to them. Repression and bitterness are sin. If we are offended, we either repent ourselves for being unjustly offended or bring it to them alone. Those are our only options.

There is a difference between needing to divide and loving to divide. A divisive person loves to fight. The differences are usually observable. A person who loves the peace and purity of the church may be forced into division, but it is not his character. He entered arguments regrettably and infrequently. When forced to argue, he remains fair, truthful, and loving in his responses. He grieves to have to disagree with a brother. Those who are divisive by nature lust for the fray, incite its onset, and delight in being able to conquer another person. For them victory means everything. So in an argument they twist words, call names, threaten, manipulate procedures, and attempt to extend the debate as long as possible and along as many fronts as possible.  Divisive persons frequent the debates of the church. As a result the same voices and personalities tend to appear over and over again, even though the issues change. (Hughes, 364)

Paul closes out the letter to Titus with a few personal addresses to him. Not much is known about Artemas or Zenas, but Tychicus was a frequent messenger of Paul and Apollos was a widely known preacher in the early church. Apparently, Zenas and Apollos were making a very quick stop by the island of Crete, so Paul urges Titus to have the churches there send them away lacking nothing. This leads Paul to give one final exhortation for good works. The emphasis within these verses is clearly upon providing for others, whether by financial help or other gifts.

Why does Paul once again emphasize the need for good works in the second-to-last verse of the letter? So as to help cases of urgent need and not be unfruitful. We are supposed to be people that are willing to make sure that the needs of others are met. As believers, we need to be a people who are devoted to helping other brothers and sisters in Christ. I think this also extends beyond our local congregation. We must make certain that we do not lose our connection to other Christians across the world. Zenas and Apollos were not members of Cretan churches, yet Paul urged Titus to support them regardless. Our local church is one congregation among the universal church of Christ followers across the planet. We should remember that meeting these needs is not merely financial. In fact, the greatest act that we can do for other Christians is to pray for them. We want to a people who are active in supporting other brothers and sisters.