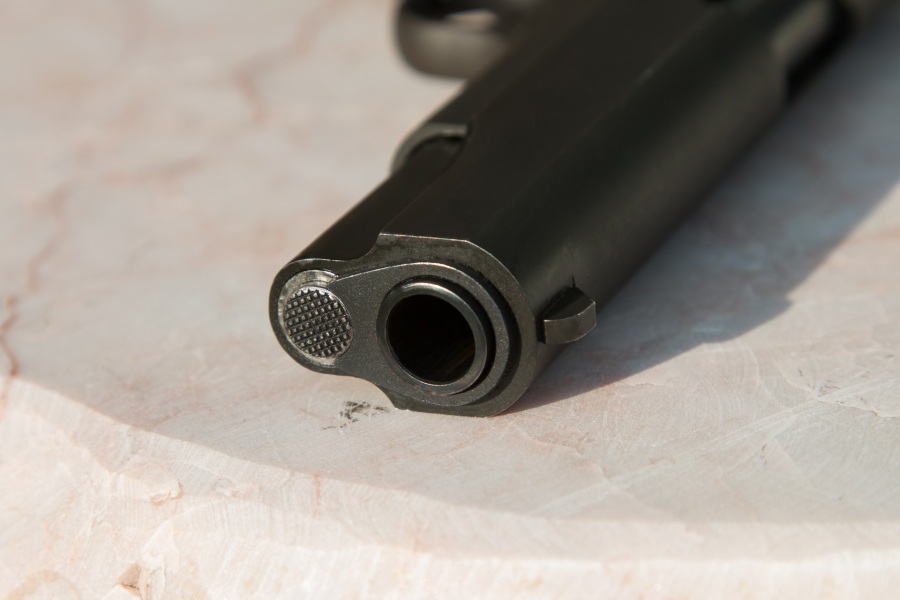 Preaching through the Sermon on the Mount is providing great material for blog posts because Jesus raises far too many topics and issues to cover from the pulpit in the 16 weeks I have planned for the series.

Last week, I attempted to expound upon remarriage since questions of remarriage are raised from Jesus’ discussion of divorce. And because our text from Sunday concerns retaliation and loving our enemies, it is only natural to address the topic of Christians and self-defense.

Right away, I’ll confess that I don’t see a problem with Christians owning guns.

Saturday I went target practicing with my dad and brother in hopes of being ready to hunt deer this year.

As with any tool, guns themselves are not the issue; people are.

With that said, this is NOT a post about gun rights or any of the political baggage associated with it.

Instead, this is a post for Christians regarding whether self-defense is Christ-like and biblical.

Also, to keep things semi-reined in, I’ll only be considering self-defense that is either lethal or likely to be lethal. Should Christians Learn Karate is a post for another day.

Because the Bible is the ultimate authority for Christ’s followers, we must always turn to the Bible ultimately. But what do we do with issues like this where many of God’s servants in the Bible used violence and just as many verses seem to encourage pacifism?

I would argue that the Christian standard of self-defense is to be ready to die before we ever take the life of a human made in God’s image.

Nowhere in the New Testament does Jesus or the apostles advocate self-preservation by self-defense; rather, the Scriptures call us to do the seemingly impossible.

Romans 12:17-21 | Repay no one evil for evil, but give thought to do what is honorable in the sight of all. If possible, so far as it depends on you, live peaceably with all. Beloved, never avenge yourselves, but leave it to the wrath of God, for it is written, “Vengeance is mine, I will repay, says the Lord.” To the contrary, “if your enemy is hungry, feed him; if he is thirsty, give him something to drink; for by so doing you will heap burning coals on his head.” Do not be overcome by evil, but overcome evil with good.

1 Peter 3:8-9 | Finally, all of you, have unity of mind, sympathy, brotherly love, a tender heart, and a humble mind. Do not repay evil for evil or reviling for reviling, but on the contrary, bless, for to this you were called, that you may obtain a blessing.

Matthew 10:28 | Do not fear those who kill the body but cannot kill the soul. Rather fear him who can destroy both soul and body in hell.

Matthew 5:38-47 | You have heard that it was said, ‘An eye for an eye and a tooth for a tooth.’ But I say to you, Do not resist the one who is evil. But if anyone slaps you on the right cheek, turn to him the other also. And if anyone would sue you and take your tunic, let him have your cloak as well. And if anyone forces you to go one mile, go with him two miles. Give to the one who begs from you, and do not refuse the one who would borrow from you. You have heard that it was said, ‘You shall love your neighbor and hate your enemy.’ But I say to you, Love your enemies and pray for those who persecute you, so that you may be sons of your Father who is in heaven. For he makes his sun rise on the evil and on the good, and sends rain on the just and on the unjust. For if you love those who love you, what reward do you have? Do not even the tax collectors do the same? And if you greet only your brothers, what more are you doing than others? Do not even the Gentiles do the same?

There are certainly more verses I could present, but hopefully the pattern is clear: Christians respond to evil with love.

You also find throughout the Scriptures the disciples rejoicing in the midst of suffering and numerous warnings that trials and suffering will come.

Once again, nowhere do you find Jesus or the apostles encouraging Christians to act in self-defense or retaliation.

Instead, we find Jesus comparing His disciples to sheep being sent in the midst of wolves (Matt. 10:16-22). His subsequent call is not for us to be battle-ready sheep; He simply calls for us to endure! This endurance is meant to come from being wise as a serpent and innocent as a dove. Though surrounded by danger and violence, Christians are meant to maintain their innocence.

Please note also that sheep and doves are not necessarily known for being masters of self-defense.

But what about being wise as a serpent?

Snakes are great at hiding. Even venomous snakes typically prefer hiding to striking. I think Jesus uses snakes as a metaphor to prevent us from developing a martyrdom complex. We should joyfully embrace suffering, even death, but we are not called to hunger for it. Underground churches seem to be a great example of being innocent as a dove and wise as a serpent.

The fact is that Jesus knew that His disciples would be in danger of both targeted persecution and evil in general.

He also knew that many would die from such violence, but He calls us to answer such forms of evil with love nonetheless.

But what about David, the warrior king? He certainly killed in God’s name, didn’t he?

What about the prophet Samuel hacking an enemy king to pieces?

If the standard for God’s people is nonviolence, how do we justify Elijah’s slaughtering of the Baal’s prophets?

Do Jesus’ teachings contradict the Old Testament in these examples?

Romans 13:1-7 is key to understanding Old Testament violence. In these verses, Paul states that God grants to governments ruling authority that comes with a sword for punishment against wrongdoers. The apostle is essentially acknowledging that governments of the world cannot function under pacifism, and they shouldn’t be forced to try. Rather, governments are instituted by God, created to be servants for God’s good.

Similarly, in Luke 3:14, John the Baptist speaks to repentant soldiers, encouraging them no longer to take money by force or use their authority for selfish gain. Notably absent is a command for them to drop their swords. The soldier’s sword is the government’s sword. Soldiers and police are instruments for the govermental authority instituted by God.

In the same way, David was Israel’s king.

Samuel and Elijah were Israel’s prophets.

The necessary violence of God’s people in the Old Testament was an act for the kingdom of Israel, God’s kingdom. Romans 13 justifies their actions because the actions were on behalf of their physical government.

But today, God does not have a physical kingdom. He has a spiritual kingdom, and its citizens live by the spirit, not by the flesh.

John Piper describes the difference between Jesus’ kingdom and the kingdoms of the world in a helpful thought on John 18:36:

In this passage, Jesus says: “My kingdom is not of this world. If My kingdom were of this world, then My servants would be fighting, that I might not be delivered up to the Jews; but as it is, My kingdom is not of this realm.” When Jesus says that if his kingdom were of this world his servants would be fighting, he implies that it is right for kingdoms of this world to fight when the cause is just and circumstances require it. As Christians, we are citizens of “two kingdoms”–our country on earth, and heaven. Jesus shows us that it is never right to fight for the sake of his spiritual kingdom, but that it is right to fight on behalf of earthly kingdoms (when necessary to counter evil and destruction).

We are citizens of two kingdoms, indeed. For Christians who are soldiers or police officers, it seems acceptable for them to act as the government’s sword. But we must not mistake this as also being applicable to individuals within Christ’s kingdom.

But what about Luke 22:35-38, where Jesus tells His disciples to sell their cloaks and buy swords? Is Jesus advocating that His disciples be ready to kill to defend themselves if necessary?

Though the passage has been rigorously debated, some commentators suggest that Jesus’ answer to His disciples’ display of two swords, “It is enough”, was a sigh of exasperation, not of content acknowledgement.

Jesus may have been using swords as spiritual metaphors for the impending spiritual battle that was His crucifixion, thereby encouraging His disciples to be ready for intense spiritual warfare.

If this was the case, Jesus’ words might better be translated as, “Enough!” because once again, the disciples failed to understand Jesus’ point.

This seems like a realistic interpretation of the passage to me, especially considering what happens a few verses later. Luke 22:49-51 states that one of the disciples attempted to defend Jesus, cutting off the ear of the high priest’s servant. Jesus rebukes the disciple’s action and heals the man’s ear.

Finally, I would be remiss if I ended this post without turning attention to Jesus’ advocated form of retaliation: prayer.

In Matthew 5:38-42, Jesus seemingly strips away a Christian’s grounds for physical retaliation, but in verse 44, He provides an alternative, “pray for those who persecute you”.

The Christian’s refusal to take another person’s life (even under extreme circumstances) is NOT a sign of weakness; instead, Christ’s followers “fight back” on a spiritual level, pleading with the Father on behalf of their attackers!

Christ’s followers are called to intercede in prayer for those wishing to harm us.

The question then seems to be: Can I faithfully pray for my attacker while also shooting to kill?

I believe the answer is no.

A fear of man makes lethal self-defense seem necessary, but fearing God casts those anxieties aside, allowing us to intercede in prayer for violent people instead of fighting back with more violence.

Christians retaliate with prayer, not violence.

This post is far from exhaustively addressing Christians and lethal self-defense, which is why I’ve posted several links below for further reading. I hope my thoughts whet your appetite, and you subsequently dive into this issue more deeply. The links are to a mixture of articles that both agree and disagree with my thoughts here, and I encourage you to read both stances prayerfully.

The Biblical View of Self-Defense

This article argues that Christians are biblically able to practice lethal self-defense if necessary. Though I ultimately disagree with the author, it’s a thorough and well-written argument worth considering.

Are Christians Biblically Justified to Defend Themselves Using Lethal Force?

Here is another well-written article (suggested to me by a friend) that answers “yes” to the question above. Even though I disagree with the author’s final conclusion, he certainly does not take the issue lightly, and I strongly encouraging reading his thoughts.

Should Christians Arm Themselves?

This article by John Piper is especially beneficial. In number 8, Piper attempts to address the question, “Can I shoot my wife’s assailant?”

Another great read from Piper, and by the way, this is the article I quoted above.

The Danger of Self-Defense

This is the last article from Desiring God I’ll link, I promise. Here, Paul Tripp gets to the heart of WHY we are concerned with self-defense and self-preservation.

Nonviolence in the Ancient Church and Christian Obedience

This is a brief historical survey of nonviolence in the early church. It doesn’t attempt to answer questions, just give historical perspective.